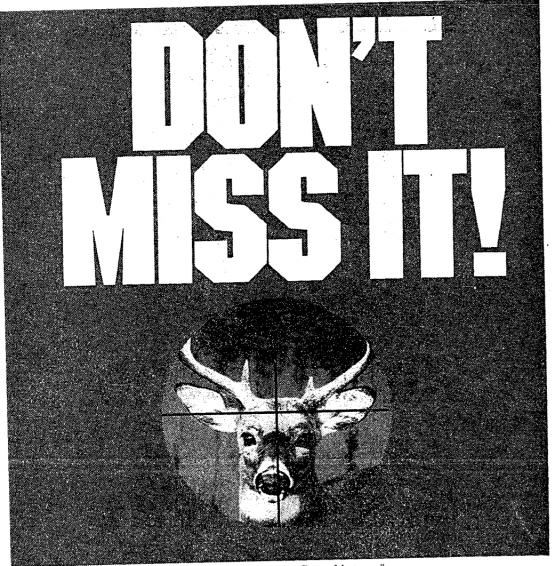 Some CBS Reports proved to be very controversial. “The Guns of Autumn,” a piece about the American passion for hunting, led to a wide polemic, one that started before the show even aired. The episode documented the sport of hunting and the two-billion-dollar-a-year business that it had become in the United States. It included interviews with hunters and scenes of hunting as well as facts and figures. “Written, produced and directed by Irv Drasnin and narrated in properly down-home fashion by Dan Rather” the show, as the Los Angeles Times reported, was “forced to cross highly polarized terrain.”

While the New York Times called it “extremely powerful television,” and commented on how “the combined impact of script, pictures and sound is extraordinary,” it also pointed to its anti-hunting bias. C. Boyd Pfeiffer at the Washington Post argued that it “should receive and award for the most biased TV reporting of the year, possibly the decade.” His review criticized the show for purposely focusing on “fringe elements of a larger group” and condemned it as “an insult to all the hunters I know, to the ethics of fair and responsible hunting practices and even to the practice of fair TV journalism.”
Pfeiffer was not the only one with such a negative opinion. In addition to thousands of telephone calls, CBS received the same amount of angry mails. The National Rifle Association called for a boycott of the show, which aired on September 5, 1975, with great success. All but one of the scheduled advertisers canceled their commercials, before having seen the show, for fear of the backlash from hunters. The company Block Drugs kept its two 30-second spots. The pressure was so high that the Federal Communications Commission conducted a preliminary investigation to determine if CBS had violated the Fairness Doctrine. As emphasized by Bill Leonard, senior vice president of CBS news, the whole thing turned into a matter of freedom of the press and denunciations of efforts to exert influence.
Anticipating heated and negative reactions, CBS had scheduled, before airing the first show, a follow-up entitled “Echoes of the Guns of Autumn.” In it, Charles Collingwood focused on the pressures exerted on the network and its affiliates, and gave people objecting to the show an opportunity to express their opinions. As Broadcasting reported, “'Echoes' detailed the complaints of gun clubs to the network and its affiliated stations on the original program; elicited the views of ordinary hunters on the documentary; provided antigun spokesmen with an opportunity to reply; showed telephone operators at the network and affiliated stations listening to reactions from callers and gave CBS News producer and writer of the show Irv Drasnin an opportunity to defend the content of the documentary.” John Carmody of the Washington Post praised the follow-up and even C. Boyd Pfeiffer, who had not minced his words about the original show, described “Echoes” as a "basically fair attempt to cover sides of a highly controversial and emotional issue.”
When the follow-up was broadcast on September 28, Geritol was the sole advertiser. The FCC took no action against CBS as no complainant could demonstrate that, in its overall programming, CBS had presented only one side of a controversial issue of public importance. In "Echoes," Charles Collingwood reported how the network received the largest mail response of any CBS News broadcast since the Ed Murrow program on Senator McCarthy in 1954: “some 19.000 letters and telegrams,” with a ratio of more than three-to-one against the first program.
As seen in its October 1975 advertisement, "Seeing through the smoke of burning issues," CBS regarded the polemic as evidence of the great journalistic work it was doing. 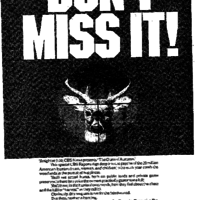 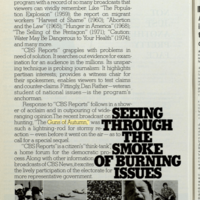 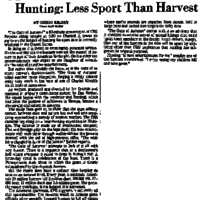 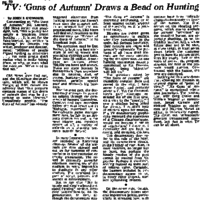 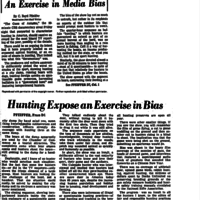 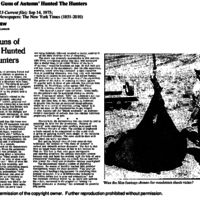 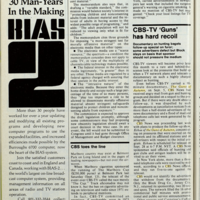 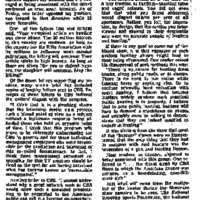 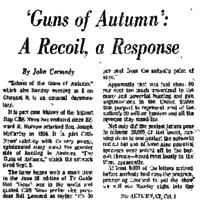 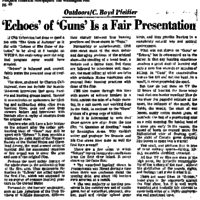