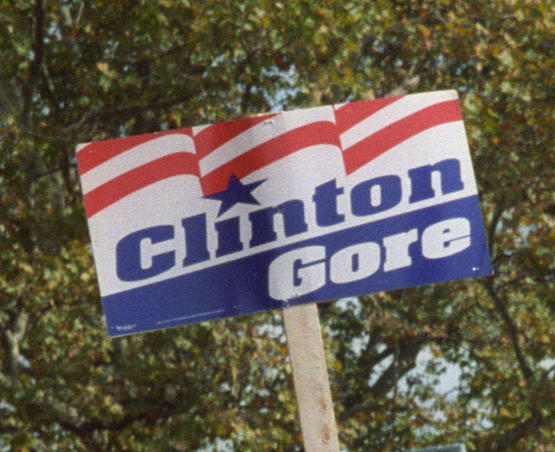 Clinton-Gore poster for the 1992 election.

Incumbent presidents usually do not face opposition from their own party, but in 1992 the economy was in recession, and Bush had reneged his 1988 promise not to raise taxes in an attempt to curb a soaring budget deficit. He faced a stiff early challenge from Pat Buchanan when the conservative commentator captured nearly 37 percent of the vote in the New Hampshire primary. Although Bush went on to win the Republican nomination, his campaign had suffered.

On the Democratic side the primary season was long and eventful, with former California governor Jerry Brown, former Massachusetts senator Paul Tsongas, and sitting governor of Arkansas Bill Clinton wooing the voters. After news of his alleged twelve-year affair with Gennifer Flowers came out, Clinton’s campaign was nearly derailed. The 60 Minutes interview he and his wife Hillary gave, in which he admitted their marital problems, allowed him to rebound and dominate the Super Tuesday primaries. Despite charges that he dodged the draft and was unfaithful to his wife, Clinton secured the Democratic nomination at the convention in New York and choose Tennessee Senator Al Gore as his running mate. Gore was perceived to be strong on family values and environmental issues, and the team positioned itself as centrists, “New Democrats,” in an effort to avoid charges of being tax-and-spend liberals who were weak on defense.

Seeing two candidates with problems, Texas self-made billionaire Ross Perot saw a chance as a third-party candidate. After supporters filed petitions enabling him to be on the ballot in all fifty states, Perot earned early enthusiastic support, particularly among voters dissatisfied with traditional party politics. Although polls showed him leading both Clinton and Bush, he unexpectedly dropped from the race on the eve of the Democratic convention in July. He came back on the campaign trail in September with former admiral James Stockdale as his vice presidential running mate. Spending $65 million of his own money, Perot led a non-traditional campaign, which ran on opposition to the North American Free Trade Agreement (NAFTA), elimination of the trade deficit, and national debts. He rarely gave stump speeches and instead used thirty-minute infomercial-style advertisements.

With his middle-of-the road approach and his empathy for the plight of struggling Americans at a time when Bush appeared out of touch, Clinton won 43 percent of the vote and a dramatic 370 electoral votes against 168 for Bush. The Republican candidate had alienated his conservative base by breaking his 1988 campaign pledge against raising taxes. In addition, the economy was in a recession, and foreign policy, Bush's perceived greatest strength, did not play a big role in the campaign following the collapse of the Soviet Union.

In the 1994 midterm elections, members of the Republican Party captured majorities in the House of Representatives, Senate, and governors' mansions in what was called the Republican Revolution. Members of the Republican party had released a document called the “Contract with America,” in which they detailed what they would do if they were to take the House. The document was the brain child of the Heritage Foundation, a conservative think tank, and it also used passages and ideas from former President Ronald Reagan's 1985 State of the Union Address. It laid out many of the conservative movement's ideas such as shrinking the size of government, promoting lower taxes and greater entrepreneurial activity, and advocated both tort reform and welfare reform. Most importantly, it turned the midterm elections, often seen as “local” elections, into a national referendum by promising a major reform of the country’s politics.

The Republican Party won control of both the House and the Senate and was able to pass conservative legislation such as the Telecommunications Act of 1996, the Personal Responsibility and Work Opportunity Act, and the Defense of Marriage Act. This victory also contributed to the defeat of Clinton’s health care plan.

After the 1988 election, a soul-searching process started among news organizations as many felt that the media had not done a good job of informing the public. They had focused too much on the “horse race” and superficial issues such as style and had been too easily manipulated by staged events of the 1998 campaign, such as George H. W. Bush’s visit to three American flag factories.

Late in 1991, the four major television news organizations, ABC, CBS, NBC, and CNN, started to plan for more serious coverage of the 1992 campaign. They wanted to focus on a new format for debates, offer more analytical reporting on issues, and regularly scrutinize political commercials. In an effort to cut costs, networks considered not covering both conventions and, for the first time, pooling voter information on primary nights and using a new organization called Voter Research and Survey. They also reduced coverage of the daily political coverage, using instead materials provided by C-SPAN a well as well collaborating with local stations, instead of sending their own crews. Instead of wasting time and money on the campaign trail, the networks could now use shared videotapes and do more research on the candidates’ positions. Things did not pan out that way.

The candidates themselves changed the way they campaigned, skirting the news media and addressing their message directly to the voters. They adjusted to the technological revolution of the 1980s, with video cassette recorders, cable television, and personal computers, but also to the fact that audiences had become used to getting information not from centralized sources but from a multitude of sources. As a response, candidates used of interactive 800 numbers and computers and were able to organize electronic town meetings via satellites. Instead of TV news shows, candidates appeared on TV talk shows such as the Phil Donahue Show, where Jerry Brown and Bill Clinton faced off in the primary, or Larry King Live, where Ross Perrot announced his candidacy. Such shows allowed ordinary citizens to call in and audience members to directly ask questions to the candidates. This “unfiltered” access to candidates, a new form of electoral participation, did not, however, lead to more openness or clarity in terms of issues, as candidates sought out programs with the best chance of getting easy questions.

The networks contributed to this focus on image and style. On the evening news, they used soundbites—clips of presidential contenders speaking—that went from 42.3 seconds in 1968 to 9.3 seconds twenty years later, and was a mere 7.3 seconds in 1992. At a forum sponsored by the Joan Shorenstein Barone Center on the Press, Politics and Public Policy, top network anchors sharply criticized their own campaign reporting. Rather said that campaign reporters had shown a “lack of guts,” and Peter Jennings explained that the news media pledge of better coverage was “derailed” by the Gennifer Flowers episode. PBS's Jim Lehrer worried that the news media were losing credibility. From Tom Brokaw to Peter Jennings, all had to deal with the fact that “serious” political reporting is often dull, a difficult things in an age of exacerbated competition.

15,000 journalists attended the Democratic National Convention in Madison Square Garden in New York without a clear story to report on. The Clinton-Gore ticket had already been announced, and the only suspense was over whether Jerry Brown would be allowed to speak and if Jesse Jackson would endorse and support Clinton. Both Jennings and Rather anchored from the convention floor for their ninety-minute coverage, which started at 10 p.m., missing, for example, Jesse Jackson's much-anticipated speech on the first day. The convention was described as dull, and, in the face of dwindling ratings, Reuven Frank, former president of NBC News, suggested that networks should stop covering them, something Rather adamantly refuted in an op-ed in the New York Times. The CBS anchor argued that “It is incumbent on us to air the positions and views of the major parties in a responsible and thorough manner; covering convention is one way we do that.” Even if conventions are “uneventful, unhelpful and unwatched,” Rather was of the opinion that broadcasting them is “good citizenship, good public service.” All networks, however, devoted less than half the time to the convention as they did in 1988. The highlight of the Republican National Convention in Houston was President Reagan’s speech; the Washington Post described Pat Buchanan’s speech as a “hate-filled harangue.” As Elizabeth Glaser had done at the Democratic convention, Mary Fisher's speech on AIDS at the Republican convention helped raise consciousness about the virus and the plight of people infected. Bush delivered a speech that was not seen as the networks only signed on at 9:30 p.m. For CBS, Rather was on the floor with Ed Bradley, Connie Chung, and Bob Schieffer, while Charles Kuralt was in the booth.

In the fall of 1992, preparations started for the debates between Bush, Clinton, and Perot, which were sponsored by the bipartisan Commission on Presidential Debates. The Clinton campaign agreed that the commission should choose the panelists, but the Bush team insisted on veto power over questioners, as was done in 1988. This raised ethical questions, and several journalists and news organizations announced they would not participate. In the end, the parties decided on a nine-day marathon with three presidential debates on October 11, 15, and 19, respectively, and one vice presidential debate on October 13. In the final weeks of the campaign, Clinton held a persistent lead over President Bush, and the debates were Bush's last opportunity to catch his Democratic opponent. CBS News was unable to carry the first debate in St. Louis as the network was broadcasting the Major League Baseball playoffs. The debates drew large television audiences, as many as 90 million viewers, but Dan Rather refused to call them debates, preferring “joint appearances” and “happenings.”

Clinton’s lead in the polls remained significant, and on election night networks were attempting to observe the gentlemen’s agreement not to reveal survey results from each state until that state’s polls had closed. As the coverage began at 7 p.m., exit polls already showed that Clinton would be elected, but anchors and correspondents continued to urge people to vote. They declared Clinton the winner at 10 p.m., and twenty minutes later George H. W. Bush gave his concession speech. Dan Rather anchored the CBS News coverage with Bob Schieffer on the U.S, Senate, and Connie Chung, Mike Wallace, Charles Kuralt, and Ed Bradley following the major issues of the 1992 elections.

Wondering why the 1994 elections were not more extensively covered, the Washington Post praised CBS News for its coverage, adding that the network had “ the most and the best, with Dan Rather back in the driver’s seat and the ablest supporting team in town.” Ton Shales singled out Dan Rather who showed "the most enthusiasm, the most finesses and the most delight.”