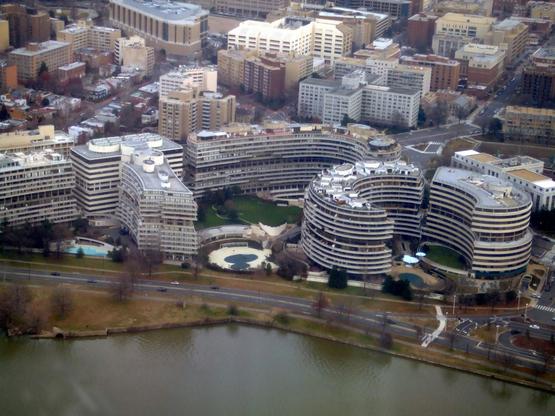 Picture of the Watergate Complex taken on January 8, 2006. Courtesy of Indutiomarus at English Wikipedia.

The Watergate scandal began early in the morning of June 17, 1972, when five burglars were arrested in the office of the Democratic National Committee, located in the Watergate Complex of buildings in Washington, D.C. What appeared to be an attempted burglary turned to be one of the biggest political scandals in American history leading to the resignation of President Nixon on August 9, 1974, as he faced likely impeachment for his role in covering up the scandal.

In 1972, President Nixon was running for reelection amid a hostile political climate with growing opposition to the Vietnam War and a deeply divided country. Members of Nixon’s Committee to Re-Elect the President (known popularly as CREEP) used aggressive tactics, including breaking into the Democratic National Committee’s Watergate headquarters, stealing copies of top-secret documents, and bugging the office’s phones. When the wiretaps failed to work properly, a group of five men returned to the Watergate building on June 17, 1972, where they were arrested. Suspicions that the White House was involved grew after detectives found copies of the reelection committee’s White House phone number among the burglars’ belongings. As more evidence of the connection between the burglary and the White House surfaced, every reporter worked to get a scoop. Two young Washington Post reporters, Carl Bernstein and Bob Woodward, deserve a great deal of the credit for uncovering the details of the Watergate scandal. In addition to their own investigation, they were fed leaks by an anonymous source they referred to as “Deep Throat,” who in 2005 was revealed to be W. Mark Felt, a former associate director of the FBI. Bernstein and Woodward were able to show the direct involvement of Nixon intimates in Watergate activities; the fact that the Watergate wiretapping and break-in had been financed through illegally laundered campaign contributions; and that “the Nixon re-election effort” engaged in "a massive campaign of political spying and sabotage" that included the Watergate bugging.

These revelations, however, did not have much impact, as the White House successfully managed to bury the story and painted the media as “liberals” working against the president. The White House also pressured television networks: after CBS News aired the first segment of a two-part television report synthesizing the scandal’s emerging ties to the White House on October 27, Nixon’s close political aide, Charles Colson, threatened CBS’s president, William Paley, and the second segment was truncated. Nixon even ordered, through channels, the FBI to tamp down its investigation on June 23, 1972; an order that would later be used as proof that the president had been part of a criminal cover-up from the beginning. Most believed the president, and he won reelection in a landslide in November 1972.

In the following months, the presiding judge of the burglary case, John J. Sirica, helped break the conspiracy case open, and revelations cascaded through the press. On April 30, 1973, Nixon announced the resignations of his two closest aides, H. R. Haldeman and John D. Ehrlichman, Attorney General Richard Kleindienst, and John Wesley Dean III, a little-known White House legal aide who had been given personal access to the FBI’s Watergate investigation. On the same day, Nixon appointed a new attorney general, Elliot Richardson, who in May 1973 named Archibald Cox as a special counsel for the Watergate investigation. The same month, a special investigating committee on abuses in the 1972 presidential campaign (the Select Committee on Presidential Campaign Activities or Senate Watergate Committee.) began, presided over by the North Carolina Democrat Samuel J. Ervin Jr. Between May 17, 1973, and August 7, 1974, millions of Americans watched the televised hearings as they unveiled a White House riddled with paranoia and corruption, where an “ends-justifies-the-means” morality had become semiofficial White House policy with illegal domestic wiretapping, money laundering to fund candidates, and widespread abuse of power.

The revelation that the White House had a taping system transformed the Watergate investigation. Both Cox and the Senate subpoenaed the tapes, but Nixon refused to release them, citing his executive privilege as president. During the so-called “Saturday Night Massacre,” Nixon ordered Richardson to fire Cox, which led to the resignations of Attorney General Richardson and Deputy Attorney General William Ruckelshaus on October 20, 1973. Solicitor General Robert Bork eventually dismissed Cox and appointed Leon Jaworski to continue the investigation. Nixon eventually agreed to release the tapes, but one contained an intentional gap of eighteen and a half minutes. raising even more suspicion.

A formal impeachment inquiry by the House Judiciary Committee was initiated in May 1974, and the House Judiciary Committee passed three articles of impeachment between July 27 and 30, 1974. On August 5, Nixon supplied transcripts of three tapes that clearly implicated him in the cover-up. Having lost all support in Congress, Nixon announced his resignation on August 8 and left office at noon the following day, August 9, 1974. On September 8, 1974, the new president, Gerald Ford, chose to grant Nixon a full and unconditional pardon for any crimes he may have committed while president.

The press played a major role in uncovering and keeping alive the story. Washington Post reporters Carl Bernstein and Bob Woodward wrote a series of article in 1972 that unveiled the major corruption at play, but the Watergate story did not get much traction until CBS News aired a two-part, twenty-two-minute overview of the Watergate scandal in October 1972. The first was segment was fourteen minutes, and the second was eight. The reports are now credited with keeping the story alive and served as a turning point in the case. Ben Bradlee, Washington Post editor at the time, recalled how "the fact that Cronkite did Watergate at all gave the story a kind of blessing, which is exactly what we needed." Every reporter in Washington worked hard on the story, including a CBS investigation team made of Daniel Schorr, Bruce Morton, Fred Graham, Bob Schieffer, Roger Mudd, Lesley Stahl, Robert Pierpoint, Connie Chung, and Dan Rather. Rather later wrote "The Palace Guard" with Gary Paul Gates, a study of the "catacomb of power."