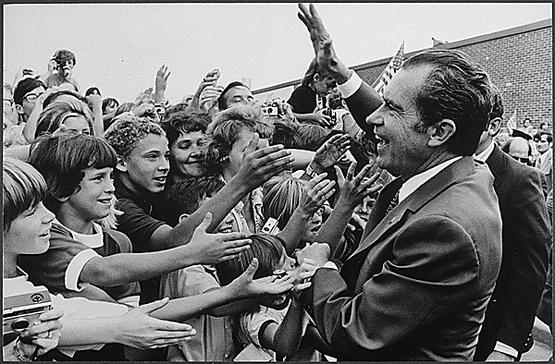 The 1972 campaign ended in a landslide victory for Republican candidate Richard Nixon. His victory was short-lived, however, as a mere two years later he resigned in the wake of the Watergate scandal.

Richard Nixon's renomination by his party was a foregone conclusion. After his “coronation” at the Republican convention in August 1972, he ran on a campaign that emphasized the economic upswing and his successes in foreign affairs. He pledged to secure “peace with honor” in Vietnam and established relations with China.

On the democratic side, things were almost as chaotic as in 1968.

After the divisive nomination struggle and convention of 1968, the McGovern-Fraser commission was charged in part with making sure that party leaders would not work behind closed doors to manipulate the nomination process. It redesigned the Democratic nomination process and streamlined it so that voters in the primaries would have a direct say on who their nominee for president would be. The fundamental principle of the McGovern-Fraser Commission—that the Democratic primaries should determine the winner of the Democratic nomination—has lasted to the present day. Senator Edward Kennedy of Massachusetts was considered the very early favorite, but the incident at Chappaquiddick in 1969 ended his prospects. Representatives Patsy Mink of Hawaii and Shirley Chisholm of New York announced their candidacies for the Democratic nomination, becoming the first Asian American and black women to run for the office. In the primaries, Senator George McGovern got an early lead over Maine Senator Edmund Muskie, Hubert Humphrey's running mate in 1968, despite opposition from many establishment Democrats.

McGovern was the first to benefit from the changes implemented as a result of the McGovern-Fraser commission. The changes in the primaries meant that party regulars were displaced by a new generation of elected representatives, described by the resentful old guards as "long-haired youths, blacks, Chicanos, and activist women." Although the Democratic National Convention was chaotic, with hundreds of delegates angry at McGovern for various reasons, McGovern became the Democratic Party’s nominee for president in 1972. Choosing a running mate was even more complicated. Senator Edward Kennedy turned down the offer, and McGovern eventually nominated Missouri Senator Thomas Eagleton. On the ballot were also former governor Endicott Peabody of Massachusetts, Alaska senator Mike Gravel, state representative Frances Farenthold of Texas, New York City advertising executive Stanley Arnold, Representative Peter Rodino of New Jersey, and Clay Smothers, a journalist from Dallas. Other real and fictional names received votes, including Martha Mitchell, Archie Bunker, Jerry Rubin, and even CBS News correspondent Roger Mudd. Eagleton wasn't declared the winner until 1:51 a.m., and his and McGovern's acceptance speeches didn't begin until well after 2 a.m. Thirteen days later, Eagleton confessed that he had been hospitalized three times in the 1960s for depression and stress, and that he had undergone electric shock therapy. McGovern first insisted that he would not remove Eagleton from the ticket, declaring that he was behind him "1,000 percent." Two weeks later, on July 21, Eagleton withdrew from the ticket under pressure and was replaced by Sargent Shriver, the former director of the Peace Corps and ambassador to France under Johnson and Nixon.

During the general election in the fall of 1972, it became evident that McGovern was too liberal for the majority of American voters. McGovern had said during the campaign, “If I were president, it would take me twenty-four hours and the stroke of a pen to terminate all military operations in Southeast Asia.” He planned on withdrawing all American troops within ninety days of taking office, whether or not U.S. prisoners of war were released. To many Americans, including many Democrats, McGovern’s position was tantamount to total capitulation in Southeast Asia. In the end, McGovern’s campaign was undermined by his own restructuring of the primary process (which alienated many powerful Democrats and reduced his funding support), the perception that his foreign policy was too extreme, and his indecisiveness over choosing a vice presidential running mate. The Nixon campaign successfully portrayed him as a radical left-wing extremist.

Nixon won the election, with a 23.2 percent margin of victory in the popular vote, the fourth largest margin in presidential election history. He received almost 18 million more popular votes than McGovern—the widest margin of any U.S. presidential election. Voters, however. distinguished McGovern from the Democratic Party as a whole. The Democrats widened their majority in Congress and picked up two Senate seats, giving them fifty-six. Despite his overwhelmingly strong position, Richard Nixon had engaged in a variety of dirty tricks during the campaign. These culminated in the botched burglary in the Watergate. The scandal ultimately led to his resignation in 1974, but it had no impact on the 1972 campaign.

During the 1974 midterm elections, Republicans lost seats in both houses of Congress, as a result of the Watergate scandal and Ford's pardon, the energy crisis, and an economy marked by inflation and stagnation, as well as the "six-year itch." Democrats won forty-nine seats in the House of Representatives, increasing their majority above the two-thirds mark (291 to 192) and ended up with a majority of sixty Senate seats against thirty-eight for the Republicans, one seat of the Independent Democrat and one for the Conservative in New York.

As preparation for the Democratic convention started, it became clear that the stakes were quite high for the networks, especially for CBS News. The network wanted to demonstrate that it was able to surpass NBC during coverage of special events and consolidate its position as the no. 1 news network. The CBS Evening News with Walter Cronkite had been winning the race in the previous five years against John Chancellor on NBC and with ABC’s Harry Smith and Harry Reasoner climbing in the ratings. In other words, “supremacy at stake in TV News.”

As described in Broadcasting, the relationship between networks and the political parties improved and cooperation replaced hostility. Networks sent more than 1,400 news professionals and produced mre than forty hours of programming, spending about $20 million. CBS alone spent the most, about $7 million, and anchorman Water Cronkite came with twenty-one correspondents. Unlike in 1968, no newsmen were “arrested or clubbed.” Ahead of the conventions, CBS aired two “What’s a Convention All About?” stories in an effort to elucidate the proceeding of the conventions and put into perspective terms such as platform, bandwagon, etc. Anchored by Walter Cronkite, the program was ostentially for youngsters but designed to provide answers for adults too. CBS also announced the launch of a fourteen-week Sunday series entitled Campaign ’72 in the 6–7 p.m. spot usually reserved for 60 Minutes. Interviewed by TVTV during the Democratic Convention, Rather explained that “I am pretty corny about that, I get excited about conventions. Each one is different for me and I do get excited about it. It’s a hell of a good story even though people say this one is duller that the last one and not as exciting as the 1952 convention, that may be true, but I find it a terrific story.  Any time you get this many politicians under one roof, for a reporter, it’s like a kid being turned loose in that proverbial candy store, and I like it and I enjoy it." According to a CBS advertisement, the network received the most accolades for its coverage of the Democratic convention.

The Republican convention was “professionally mounted, swiftly paced, and carefully timed to assure prime-time exposure.” A former television producer ran the show with stopwatch precision, according to a “secret” fifty-page script. Dan Rather obtained a copy and read from it; a passage in which representative and convention chairman Gerald Ford (R-Mich.) was to speak for one minute, from 8:53-8:54. Competing for the attention of the media were thousands of protestors against the Vietnam ar; street demonstrations led to mass arrests.

Despite low ratings, both CBS and NBC announced that they were still planning on offering gavel-to-gavel coverage in 1976. The format was not without its problem, however, especially when, in the case of the Republican convention, there was no element of surprise and networks had long dull stretches during the 3 days. ABC News chose, out of financial reasons, to do half-hour wrap-ups at 4 p.m. and a selective, edited coverage of 90 minutes in prime time.

During the general election campaign in the fall of 1972, CBS regularly organized roundtable with its four correspondents assigned to cover the Presidential candidates: Robert Pierpoint and Dan Rather who cover President Nixon, Bruce Morton and Bob Schieffer, traveling with McGovern. In early November 1972, the extensive CBS News Election Book provided anyone involved in the election night coverage background information on everything from a biography of the candidates and the major issues, a summary by Dan Rather of both camps’ campaigns, the rise of minor party, and Nixon’s scandals, which did not seem to affect his campaign.