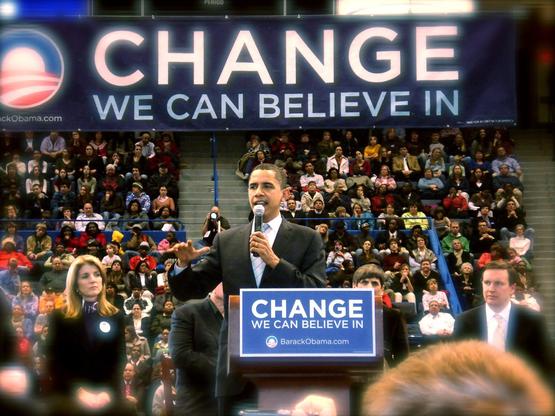 Barack Obama at a rally in Hartford, Connecticut, on February 4, 2008. Courtesy of Jakehonig.

For the first time in fifty-six years neither an incumbent president nor a vice president ran, so both major parties had a wide-open field, which resulted in grueling primaries. On the Republican side, McCain clinched the nomination against Rudy Giuliani, Mitt Romney, and Mike Huckabee. The Democratic nomination was sharply contested between Barack Obama and Hillary Clinton. While Democratic candidates from Delaware Senator Joe Biden and New Mexico Governor Bill Richardson to Ohio Representative Dennis Kucinich and Senator Christopher Dodd withdrew early in 2008, Obama and Clinton stayed in the race. They were still in a tie after Super Tuesday in February, and neither had enough delegates by the end of the primaries in June. Obama eventually secured the Democratic nomination with the help of the super delegates and, after a seventeen-month campaign, Clinton endorsed Obama. He accepted the nomination at the Democratic National Convention, held in Denver, Colorado, from August 25 to 28, 2008, and he chose Joe Biden as his running mate.

Three other parties, the Constitution Party, the Green Party, and the Libertarian Party, nominated candidates with ballot access in enough states to win the minimum 270 electoral votes needed to win the election.

The Iraq War and terrorism remained an issue in 2008. While McCain had supported the invasion, Obama had opposed it in 2003; a position that helped him with a war-weary electorate. Because President Bush had a very low approval rating, just 30 percent in 2008, the Obama campaign consistently tried to tie McCain to the outgoing president and presented him as “more of the same.” While Obama campaigned on change and reforms, McCain countered that his opponent was naive and inexperienced. At seventy-two, McCain's age raised concerns among voters, and while Obama did not discuss age directly, he instead described McCain's ideas as "old," much like Clinton in 1996. McCain’s choice of Sarah Palin, governor of Alaska, as running mate first seemed to help him with the age question and the appeal to conservatives, but her poor performance in media interviews suggested a lack of experience and knowledge about key issues, casting doubts about her qualifications to be vice president or president.

McCain and Palin had a small lead in the polls heading into September, when the financial crisis gripped the country. From September 19 to October 10, the Dow Jones Industrial Average dropped 26 percent, and the subprime mortgage crisis led to a severe contraction of liquidity in credit markets worldwide. As a result, the U.S. government had to provide emergency loans to several American firms and several major financial institutions, such as Lehman Brothers, declared bankruptcy or had to be sold. A few earlier comments by McCain had portrayed him as out of touch with the average American, and his reaction to the crisis further damaged his campaign. McCain decided not to participate in the first debate in order to return to Washington to work on a bailout package. When the bill fell short of passage in the House, he reversed his decision and attended the debate. The Obama campaign depicted him as ineffective and erratic in response to the economic crisis.

The 2008 campaign was characterized by the widespread use of the Internet and social media, for better and worse. Obama's victory is often credited to his competitive edge in social media and Internet following. It helped him raise more money than his opponents, $800 million, and mobilized an unprecedented number of voters, especially young and first-time voters. The campaign was also marked by a relentless 24/7 news cycle and by the proliferation of blogs and social media sites that disseminated their own information (both factual and erroneous). Obama was, for example, labeled a socialist and attacked for his association with Bill Ayers, the co-founder of the Weathermen, a group that carried out bombings in the 1960s. In addition, a significant percentage of the public was made to erroneously believe that Obama (a practicing Christian) was a Muslim and that he was not born in the United States.

In the end, the unpopularity of President Bush, the ongoing war in Iraq, and the perception that the Democrats would do better in solving the economic crisis led to Obama's victory. With high voter turnout, a little over 60 percent of Americans who voted, the Democrats also regained majorities in the Senate and the House.

Two years later, the Democratic Party suffered massive defeats in many national and state-level elections. Still suffering from the fall out of the 2008 recession, voters were angry at the Wall Street bailout, the passage of the Patient Protection and Affordable Care Act (Obamacare), the 9 percent unemployment rate, and were concerned about tax rates. A fiscally-focused and quasi-libertarian movement, the Tea Party group was a vocal force in mobilizing voters for Republican candidates nationwide. The Democrats kept a majority in the Senate while the Republicans regained control of the House of Representatives.

Rather's Coverage of the 2008 Election

After leaving CBS in 2006, Dan Rather moved on to HDNet TV, now AXS TV, where in November 2006 he started Dan Rather Reports, a news magazine for which he was nominated for and won numerous awards. Passionate about all things political, especially elections, Rather covered the 2008 election extensively, starting as early as February 2007, when he hosted town hall meeting live from Princeton University, looking at the race to the White House that was still twenty months away, but in full swing for more than a dozen candidates.

During primary season, Rather reported live from the major races, including the New Hampshire, South Carolina, and Florida primaries, as well as five hours of live coverage of Super Tuesday from the campus of the University of Southern California on February 5, 2008. Rather surrounded himself with veteran campaign strategists Republican Mike Murphy and Democrat Donald Fowler—both provided additional analysis and commentary on the primary results as they came in. Rather offered in-depth coverage and analysis of the North Carolina and Indiana primaries. Rather was joined on the broadcast by former congressman Tony Coelho (D-CA), veteran campaign strategist Donald Fowler, pollster Peter Hart, media critic Tom Rosenstiel, and superdelegate Lauren Wolfe, president of the College Democrats of America.

Rather also interviewed Republican presidential hopeful John Mc Cain on his “straight talk express” in May 2007, reported on the Obama campaign, and investigated how the Democratic candidate was able to raise more money than any other presidential candidate.

Rather attended both the Democratic and the Republican conventions in the summer of 2008 and did several stories "around" the election in an effort to provide context. He investigated efforts to limit or end lobbyists' access to lawmakers, discussed the state of politics with Democratic strategist James Carville, and talked with Nate Silver, professional prognosticator of polls. He looked at the controversy over voting machines, at the resurgent Texas Democrats, and at how internet web sites were increasingly setting the daily news agenda during the election.

On November 11, 2008, Dan Rather hosted comprehensive live election coverage from the Newseum in Washington, D.C. He was joined by Donald Fowler Jr. and Todd Harris, who had been a strategist and spokesman for John McCain, Arnold Schwarzenegger, Jeb Bush, and Fred Thompson. Other guests included Nate Silver; Terry Nelson, who was political director for Bush/Cheney 2004 and the first of John McCain's campaign managers in 2008; Dahlia Lithwick, senior editor of Slate magazine; and George LeMieux, who served as chief of staff to Florida Governor Charlie Crist and author of "The LeMieux Report," which analyzes key business and political issues in Florida. Also joining the broadcast was Drew Westin, political psychologist and author of The Political Brain, who studies the ways voters make decisions.

Rather then looked at the historic election of Barack Obama through the eyes of the Pulitzer Prize-winning reporter and historian Roger Wilkins on November 25, 2008. In January 2009, he followed a group who lived in Memphis when Martin Luther King was assassinated as they traveled to Washington, D.C., to see their dream fulfilled.

In 2010, Rather participated in a panel discussion organized by C-SPAN that analyzed the results of the 2010 midterm election at Georgetown University. He joined former White House deputy chief of staff Harold Ickes and Ohio congressman and former presidential candidate Dennis Kucinich.