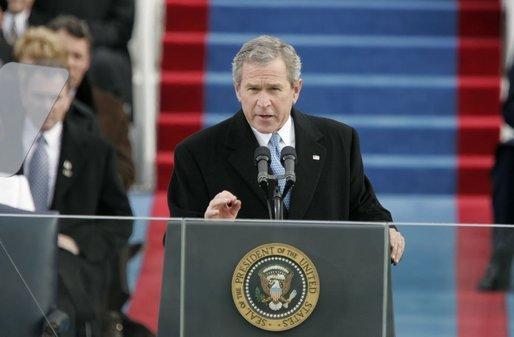 With 50.7 percent of the popular vote, incumbent President George W. Bush narrowly won a second term against U.S. Senator John Kerry of Massachusetts in the 2004 election.

As the sitting president, Bush faced no real opposition on the Republican side while on the Democratic side ten candidates fought for the nomination. These included Vermont Governor Howard Dean, North Carolina Senator John Edwards, the Reverend Al Sharpton, Missouri Congressman Richard Gephardt, Joseph Lieberman, and, much later, retired four-star general Wesley Clark. While Howard Dean had a strong showing, especially with his innovative embrace of the Internet for campaigning and fundraising, Kerry eventually won the nomination and selected Edwards as his running mate.

Foreign policy was the dominant theme of the 2004 campaign. In the wake of the 9/11 attacks, Americans went through a wave of patriotism and rallied around President Bush, giving him approval ratings of 90 percent. Following the first few months of the Iraq War, Bush's approval rating remained historically high at approximately 70 percent. As the 2004 election approached, however, opposition to the war in Iraq began to grow, and the lack of evidence that Iraq had stocks of weapons of mass destruction, which had been the main reason for invading the country, was a major campaign issue. The Democrats nominated a decorated Vietnam War veteran. With combat experience, three Purple Hearts, and a foreign policy background, John Kerry seemed like the right challenger in a time of war. His campaign appealed to the dwindling popularity of the Iraq War and also focused on the theme of making America "stronger at home and more respected in the world." In addition, Kerry proposed plans to reduce unemployment, tackle the national deficit, roll back tax cuts for the wealthiest, and increase access to health care. The candidates had also opposing views on religion, abortion, gay rights and same-sex marriage, as well as stem cell research.

Bush focused his campaign on national security, presenting himself as a decisive leader and successfully painted a picture of Kerry as a "flip-flopper," due to Kerry's long trail of confusing and sometimes contradictory statements about invasion of Iraq. As early as March 2004, the Bush campaign followed "an aggressive and precise 90-day strategy to define Senator John Kerry as indecisive and lacking conviction." 2004 03 20 NYT kerry Kerry tried to show that it was the president who had changed his mind and position repeatedly when he abandoned positions on issues such as how to regulate air pollution or whether states should be allowed to sanction same-sex marriage, changed his mind about the merits of creating the Homeland Security Department, and made a major exception to his stance on free trade by agreeing to tariffs on steel. But the popular perception of Kerry became fixed and greatly impacted the campaign.

During the general election, Kerry was accused by the Swift Boat Veterans and POWs for Truth of "willful distortion of the conduct" of American servicemen during that war, and his alleged "withholding and/or distortion of material facts" as to his own conduct during that war. The group challenged the legitimacy of each of the combat medals awarded to Kerry by the U.S. Navy and the disposition of his discharge. Widely publicized, the smear campaign was later discredited, but it considerably damaged Kerry's campaign and the Democratic candidate lost support among veterans. 2004 8 21 The term swiftboating has been used since the campaign to describe a harsh attack by a political opponent that is dishonest, personal, and unfair. At the same time, a group called Texas for Truth ran their own television ad reprising charges that President Bush failed to perform his service in the Texas Air National Guard while on temporary assignment in Alabama. 2004 02 NYT primaries On September 8, 2004, producer Mary Mapes and Dan Rather investigated the same claims in the 60 Minutes II story "For the Record" based on documents whose veracity was later questioned. Finally, four excerpts of a video of Osama bin Laden addressing the American people were broadcast on al Jazeera four days before the election, on October 29. Bin Laden claimed credit for the September 11, 2001, attacks and taunted Bush over his response to them. In the days following the video's release, Bush's lead over Kerry increased by several points.

After three debates, President Bush lost some ground while John Kerry's campaign was strengthened as he almost closed 7 to 8 percent gap with his opponent. The election was extremely close, with record spending, voter turnout, and partisan dissension. Bush finished with 50.7 percent of the vote and 286 electoral votes, while Kerry captured 48.3 percent and 251 electoral votes (Edwards received 1 electoral vote). The Republicans increased their majority in the House and the Senate.

Two years later, the 2006 midterm elections saw a sweeping victory for the Democratic Party, which captured control of the House of Representatives, the Senate, and won a majority of governorships and state legislatures. Nancy Pelosi became the first woman elected Speaker of the House.

Continuing a trend that started in 1988, the three networks—ABC, CBS, and NBC—announced that they would only cover a total of three hours for the four days of convention events. It was, in the words of the Los Angeles Times, "the skimpiest broadcast schedules for the quadrennial political events since the early days of television." Among heightened security, the Democratic convention featured prime time speeches by President Clinton, John Kerry, and his running mate John Edwards as well as a member of the Illinois Senate who was running for the U.S. Senate, Barack Obama. On the Republican side, the convention took place in New York City, a week before the third anniversary of September 11, and numerous New York politicians spoke, including New York City Mayor Michael Bloomberg, former New York City mayor Rudy Giuliani, and George Pataki, the governor of New York. Other notable speakers included conservative Democrat Georgia Senator Zell Miller, Arizona Senator John McCain, and the new governor of California, Arnold Schwarzenegger. Dan Rather’s convention journal, where he gathered his impressions and analysis of both conventions, was posted on the CBS News website.

After the debates, the race was a dead heat, with different pollsters showing different results depending on the methods they used. Several states remained too close to call on the eve of the election. After the debacle of 2000, news networks were under pressure to get the 2004 election right. They vowed not to call any state before all polls were called and planned on doing their independent vote tabulations in addition to using the newly created National Election Tool. As the New York Times reported, election night was full of cliffhangers and roller coasters. Kerry first seemed on the verge of winning Pennsylvania, Ohio, and Florida, the three states that most people believed could sway the election. The race was so tight, and it boiled down to Ohio, where it was unclear how many votes were uncounted. Fox News declared that Bush had won Ohio at 12:41 a.m., but all networks were extremely cautious. By dawn, no winner had been declared. Kerry eventually conceded in a telephone call to Bush at 11 a.m EST on November 3.

It was the last election Dan Rather anchored with CBS News. On November 23, 2004, he announced he would end his twenty-four-year tenure as the anchor of the CBS Evening News and join the 60 Minutes II team as a correspondent. While the journalist had planned on continuing working for CBS, his contract was not renewed, and he left CBS in November 2005.