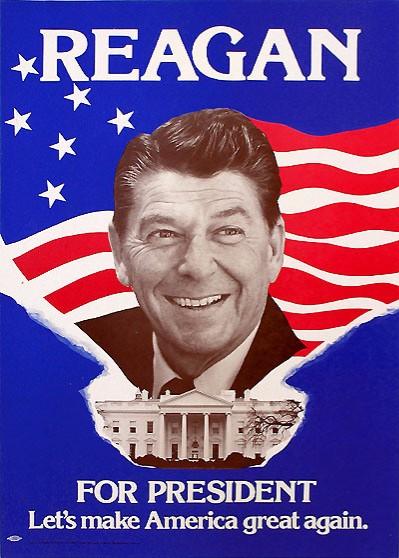 The 1980 presidential election pitted incumbent Democrat Jimmy Carter against his Republican opponent, Ronald Reagan, as well as Republican Congressman John B. Anderson, who ran as an independent. Reagan won in a landslide, and in 1982 the Republicans took control of the United States Senate for the first time in twenty-eight years, marking the beginning of what is popularly called the "Reagan Revolution."

After crowded Republican primaries with seven candidates, the race centered around former Hollywood actor and two-time Californian governor Ronald Reaganand George H. W. Bush, former director of the Central Intelligence Agency and chairman of the Republican National Committee. The contest was tense, with Bush accusing Reagan of “voodoo economics” that promised to increase federal revenue by lowering taxes. Reagan eventually won forty-four contests and arrived at the Republican National Convention in Detroit, Michigan, with 59.8 percent of the primary votes. Although many Republicans found his message too simplistic and his platform too vague and too conservative, Reagan was easily nominated with 97 percent of the vote and picked George H. W. Bush as his vice presidential nominee.

Most incumbent presidents are easily re-nominated by their party, but Carter faced fierce opposition. His administration struggled to improve the economy, and his standing in the poll plummeted in 1978. His main opponent, Senator Ted Kennedy, the last surviving brother of the late President John F. Kennedy, capitalized on these problems, but he had his own difficulties. His involvement in the fatal incident at Chappaquiddick, Massachusetts (when the car he was driving ran off a bridge, killing a woman passenger), as well as his rambling answer to Roger Mudd’s question “Senator, why do you want to be president?” caused voters to have doubts about him. Kennedy struggled to catch Carter, especially as the latter was initially helped by the Iran hostage crisis as the country rallied around the president who vowed to bring the hostages back home. Although he did not have enough delegates to win, Kennedy tried, unsuccessfully, to “open” it and to get delegates released from their voting commitments in an attempt to win the nomination. Carter won the nomination with 63 percent of the vote, against 34 percent for Kennedy at a fractious Democratic convention in New York City. It took several roll calls to conclude the first ballot for the election of the vce presidential nominee, Walter Mondale, and it was the last time during the twentieth century that the Democratic Party had a roll call for the vice presidential spot.

Although the country was plagued by many problems—double-digit inflation, rising unemployment, the crisis in Iran, the Cold War with the Soviet Union—the two candidate attacked each other and proposed few solutions. Reagan campaigned against the Communist threat and "big government" without ever laying out a clear plan on how to address the country's economic woes beyond calling for a massive cut in income taxes. Carter, on the other hand, painted his opponent as an extremist who would divide the nation and might be reckless when dealing with foreign affairs. The two camps had extensive negotiations about holding a debate, and they finally met a week before the election. For many observers, Carter won on substance, but Reagan had better poise and was able to dispel fears that he was the "dangerous" fanatic Carter portrayed. As the Iran hostage crisis dragged on, Carter appeared weak and powerless and lost ground to Reagan in the polls.

There were two debates in the fall of 1980. The first one pitted Independent candidate John Anderson against Ronald Reagan, who was declared the winner. Reagan then debated the sitting President Carter on October 28, 1980. Carter's tactic was to attack his opponent from the start, and he managed to dramatize his differences with Reagan. The Republican candidate, however, managed to present a moderate, upbeat image. He had the best lines, for example when he quipped, "There you go again," when Carter accused him of wanting to cut Medicare and asked in his closing remarks "Are you better off than you were four years ago?" Carter, who had been slightly ahead of Reagan in the polls before the debate, lost ground quickly afterward.

The result was a landslide victory for Ronald Reagan, at sixty-nine, the oldest president to be elected. Although he won just over 50 percent of the vote (Carter captured 41 percent and Anderson finished with 7 percent), Reagan achieved a dramatic victory with electoral votes: 489 to 49. Carter became the first elected incumbent to be defeated for reelection as president since 1932, when Herbert Hoover lost to Franklin D. Roosevelt.

By 1982 , however, President Reagan had grown increasingly unpopular due to a deepening recession that began on July 1981 as a results of the Federal Reserve's contradictory monetary policy, which sought to rein in high inflation as well the stagflation that began to afflict the country in the wake of the 1973 oil crisis and the 1979 energy crisis. The Democrats gained twenty-seven seats in the U.S. House of Representatives, cementing their majority in that chamber at 243 against 192 seats for the Republicans. They only gained one seat in the Senate, which remained in the hands of Republicans with fifty-four seats against forty-six for Democrats.

Networks geared up early for the primarie,s following closely the candidates who campaigned extensively. After the early caucuses in Iowa and Maine, New Hampshire was the first primary where voters chose a candidate directly among the seven Republican and three Democratic presidential hopefuls. The media then geared up for the conventions: the Republican one took place in Detroit, Michigan, from July 14 to 17, and the Democratic convention followed in Madison Square Garden in New York City from August 11 to 14. The conventions were the most competitive programs for networks, a chance to showcase their talents and increase or consolidate their journalistic credibility.

As was customary, The CBS Election team put together anextensive handbook with all relevant information, from procedural rules and delegate profiles to the efforts by conservative Republicans to find and get a like-minded candidate nominated. There were reportedly four times as many reporters as delegates at the RNC, 11,000 according to convention officials. The main question was who would be Reagan’s choice for vice president. On the convention floor, Dan Rather, Harry Reasoner, Ed Bradley, Lesley Stahl, and Morton Dean as well Bruce Morton, Bob Schieffer, Diane Sawyer, and Susan Spencer all hustled to get information. Mike Wallace landed an interview with both Ronald and Nancy Reagan for 60 Minutes.

The Los Angeles Times printed that the three networks, ABC, CBS, and NBC, spent most of the night as “a conveyor belt for rumors” about Ford. At 9:55 p.m., Rather announced that Reagan had met most of Ford’s demands, and it appeared that the deal was sealed. He offered, however, cautionary warnings as Ford’s selection as the vice presidential nominee had not been officially confirmed. In the end, negotiations broke down, and Lesley Stahl announced that George H. W. Bush had been chosen. The networks were criticized for influencing events at the convention, something Rather refuted.

If the Republican convention was suspenseful, the Democratic one promised to be as dramatic. Expecting a volatile convention, CBS decided to run Dan Rather’s interview with Jimmy and Rosalynn Carter during the regular 60 Minutes slot on Sunday evening and not as originally planned on the first day, like they did with the Reagan interview. A debate and then subsequent vote was scheduled on a proposed rule, F3C, requiring delegates to vote for the candidate in whose name they were elected. This would go against Teddy Kennedy’s effort to force an “open convention,” where delegates would be asked to vote for the candidate of their choice, not the one chosen in the primaries. The measure passed, and Kennedy issued a brief withdrawal statement. The press judged the convention dull, and so was  the television coverage. With both conventions being extremely scripted, networks slowly moved away from a gavel-to-gavel approach, cutting away from large blocks of convention during the afternoons, for example.

On November 4, 1980, Walter Cronkite sat for his last anchoring of a presidential election with Harry Reasoner, responsible for the East; Dan Rather, the Midwest; Bob Schieffer, the South; and Lesley Stahl, the West, as well as Bill Moyers, Jeff Greenfield, and J. Kilpatrick. After two years of preparation and $20 million in spending, the networks concluded campaign 1980 within two hours with the sweeping victory of Ronald Reagan. As early as 7 p.m. Eastern Time, exit polls pointed to a Reagan victory. At 9:01 p.m. President Carter telephoned Reagan, and an hour later he gave the earliest concession speech by a presidential candidate since 1904. Political leaders in the West criticized the president, arguing that thousands did not bother to go and vote after his concession speech.