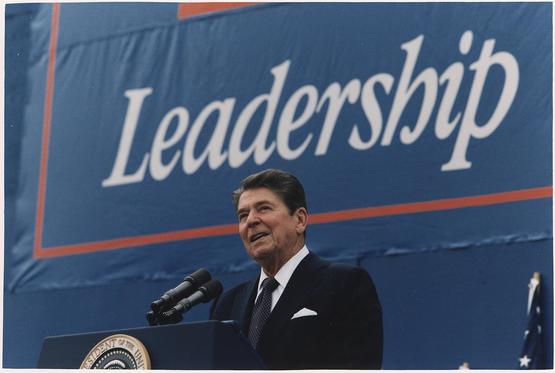 On November 6, 1984, Republican Ronald Reagan was elected to a second term in one of the biggest landslides in U.S. election history. He defeated former vice president Walter Mondale. Democratic nominee Mondale had chosen Geraldine Ferraro as his running mate, the first time a major party had a woman on its ticket.

Reagan faced no opposition in the primaries and was easily renominated by the Republican Party. The field was more crowded on the Democratic side. Out of the eight initial candidates, three remained in the race: the African American preacher and civil rights activist Jesse Jackson, incumbent senator Gary Hart of Colorado, and former senator and vice president Walter Mondale. Mondale eventually won the nomination and made history by choosing as his running mate Geraldine Ferraro, a three-term congresswoman from New York.

The Democratic ticket could never find an issue to rally voters against Reagan, who represented for many voters leadership, patriotism, and optimism. Neither the increasing gap between rich and poor, the alleged misbehavior by Reagan aides during the Iran-Contra affair, nor Reagan’s close ties with aggressive fundamentalist groups could make a dent in the reputation of the man his detractors called the “Teflon President” and his supporters referred to as “the Great Communicator.” Reagan’s poor performance in two of the televised debates did not diminish his lead in the polls.

On election day, Reagan won by 17 million popular votes and an electoral landslide of 525–13, the second largest electoral victory in history.

Two years later, Republicans faced tough midterm elections. Although Reagan himself was still relatively popular, the president's party, as is often the case in midterm elections, lost seats. Winning a net gain of eights seats, the Democrats were able to recapture control of the Senate for the first time since 1980 with a fifty-five to forty-five balance. They also managed to cement their majority in the House, where they gained five additional seats, bringing the balance to 258–177.

The 1984 elections came three years after Dan Rather replaced Walter Cronkite as anchor of the CBS Evening News. After a rocky start, Rather found his bearings and had been leading in the ratings against ABC’s Peter Jennings and NBC’s Tom Brokaw. Presidential elections were always a time of heightened competition among the networks, and 1984 was no exception. It was the first presidential election that Dan Rather, Tom Brokaw, and Peter Jennings anchored, and the stakes were high for the newly-minted anchors.

With Reagan's renomination a given, the media focused more heavily on the Democratic primaries, where everyone expected Mondale to win the early primaries. Gary Hart's victory in New Hampshire, however, changed everything, “a first-class upset.” He and Jesse Jackson, the second African American to launch a nationwide presidential campaign, proved to be surprising opponents. While they welcomed the unexpected suspense, the networks were markedly more cautious in calling races before most of the polls were closed during the primaries, a response to sharp criticisms about the use of exit polls during the 1980 election. Eleven debates were organized during the Democratic primaries with, among others, ABC’s Barbara Walters, NBC’s John Chancellor, as well as Ted Koppel and Phil Donahue as moderators.

On March 28, 1984, the eighth Democratic presidential debate was moderated by Dan Rather, produced by Joan Richman, and directed by Artie Bloom at Columbia University. Hoping “not to get pat answers, not to get pre-packaged response . . . have meaningful straight talk,” CBS used a different stage for the debate: candidates and moderator were seated at a round table, with Hart and Mondale sitting directly across from each other and Jackson face to face with Rather. Eight cameras were used to capture the event from many angles. The Washington Post described Rather’s questions as “sharp, fresh and conductive to good answers. His first was a doozie: he asked each candidate to confess his “main weakness . . . as a person.” The debate was marked by sharp exchanges between Hart and Mondale, making Jackson and even Rather look more presidential.

For the 1984 conventions, the three networks decided to move away from a gavel-to-gavel coverage, which only a handful of viewers tuned in to anyway, and offered instead a two-hours-a-day summary. Only CNN, C-SPAN, and PBS stayed with the convention throughout the day. This led to politicians scrambling to ensure that their speeches would be aired during prime time. During the 1984 Democratic National Convention, held at the Moscone Center in San Francisco, California, from July 16 to July 19, 1984, three of these speeches stood out: New York Mayor Mario Cuomo’s “Tales of Two Cities,” and vice presidential nominee Geraldine Ferraro’s acceptance speech. But it was Jesse Jackson’s “Our Time Has Come” speech that triggered the most reactions. Described as “incandescent,” it was clear to most that it was an enormously powerful moment, celebrating the very possibility of an African American presidential candidate.

The 1984 National Republican Convention convened from August 20 to August 23, 1984, at Dallas Convention Center in Texas. As Reagan's nomination was unchallenged, the convention was judged by most as being quite dull. The main and only controversy revolved around whether or not networks should air the “Reagan film,” an eighteen-minute film used to introduce the president. Considering it a commercial and not hard news, ABC and CBS decided against airing it. Instead, they presented on-air discussions on the issues and their decision, showing excerpts from the Reagan's and the Mondale's film to make their points. In the absence of any hard news coming from the convention, NBC, as well as C-SPAN and CNN, decided that the airing of the film itself had become the news, and they showed it.

CBS News and Rather looked “strong” in their coverage of the conventions, according to the Washington Post,  and Rather worked well with the floor correspondents Ed Bradley, Lesley Stahl, Bob Schieffer, and, for the first time, Diane Sawyer, as well Eric Engberg, Bob Faw, and Susan Spencer. During the Republican convention, Rather interviewed Vice President George Bush and First Lady Nancy Reagan. He was joined by Bill Moyers for “the most trenchant and accessible analysis of the conservative takeover” of the Republican Party. According to Tom Shales, “this conversation between Moyers and Rather was a dramatic reassertion of the depth and strength of the CBS team. This wasn’t just tossing the latest floor gossip or restating voguish truisms. Moyers was superb.”

Reagan and Mondale debated each other twice in the fall of 1984, on October 7, 1984, and October 21, 1984, while Vice President George H. W. Busch debated Democratic contender Geraldine Ferraro once on October 11, 1984. All three debates were sponsored by the League of Women Voters, which submitted 103 names of journalists before the candidates could find three they could agree on. The first debate was moderated by Barbara Walters of ABC News, with James Wieghart of the New York Daily News, Diane Sawyer of CBS News, and Fred Barnes of the Baltimore Sun as panelists. The focus was on economic and domestic issues. Behind in the polls, Mondale’s plan was to go on the offensive from the start while Reagan, much like he did in 1980 against Carter, planned to “stay above the fray.” The debate was marked by biting attacks and clashes about the federal deficit and the economy, as well as about abortion and the relationship between government and religion. Reagan declared that the country was better off than when he took office, while Mondale argued that huge budget deficits threaten the economy. The Democratic candidate repeatedly accused Reagan of damaging the Social Security and Medicare programs. Both men stood their ground, and the debate did not appear to sway any voters. Reagan’s performance, however, was subpar, with the president rambling at some points and seeming tired, giving rise to a torrent of stories regarding his age. The question of age came up in the the second debate, which focused on defense and foreign policy issues and was moderated by Edwin Newman of NBC News, with Georgie Anne Geyer from the Universal Press Syndicate, Marvin Kalb from NBC News, Morton Kondracke from the New Republic as panelists. Reagan was prepared, and he delivered one of the most memorable lines in the history of American presidential debates “I will not make age an issue. I will not exploit my opponent’s youth and inexperience." Although Mondale performed strongly in both debates, a strong economy and a renewed sense of strength on the international stage secured Reagan's victory.

As the campaign advanced, CBS changed its angle. While the network had earlier decided not to include events that did not advance the story of the campaign, “pieces in which a candidate said nothing new would not go on the air,” it reversed course two weeks before election night. Speeches of candidates would be given air time, and the network would focus on the “horse race” aspect of the election. In addition, as Broadcasting notes, the CBS Evening News with Dan Rather devoted as much as a fourth of its time to political news, covering everything from regional political strategies, to polling results. The candidates themselves gave a last-minute media push, buying fifteen- and thirty-minute periods on ABC, CBS, and NBC, as well as thirty-second spots. On election eve, however, Reagan’s lead over Mondale was wide and seemingly insurmountable.

Campaign 1984 was a major election year, with the election of not only the president but also one-third of the Senate and all 435 members of the House, plus thousands of state and local officials. The networks geared up for the evening, spending an estimated $20 million. For CBS News, Rather anchored the coverage from New York with Bruce Morton reporting on the presidential race, Bob Schieffer on Senate races, Lesley Stahl on the House races, as well as Bill Plante and Susan Spencer reporting from the Republican and Democratic headquarters. Bill Moyers provided analysis and commentary while Diane Sawyer reported on special interest groups such as labor, women, minorities, and religious groups. The networks anticipated confrontation with Congress, which had adopted a resolution calling “all broadcasters and other members of the media” to voluntarily “refrain from characterizing (project a trend) or projecting results,” arguing that these practices influenced voters. All networks pledged to work in that direction. Reagan’s victory, however, became obvious very early on election day. CBS declared him the “projected” winner at 5 p.m. with 3 percent of the vote tallies in and polls in twenty-six states still open. At 8:01 p.m., Reagan was officially declared the winner. The rest of the night was spent seeing how big Reagan’s victory would be. Rather also repeatedly urged viewers to vote in local and regional races: “there is still a lot at stake.” Lesley Stahl explained that “the real drama” was in the contest for the House, where the Republicans were hoping to gain twenty-six votes to regain the majority.

CBS received high scores for his coverage, especially the commentary of Bill Moyers. Dan Rather, who had a sore throat virus, was nevertheless described by the Los Angeles Times has being “wired as a fox terrier.”

For the 1986 midterm elections, CBS and Dan Rather decided to stay "wall-to-wall" with the elections, from 7 p.m. to almost 2 a.m. Eastern Time. Noting that "There's no denying that Mr. Rather gets excited about elections like no other anchor," the New York Times described CBS's coverage as "zippy, sometimes even dizzy," and Rather as "particularly unbuttoned and relaxed." For the Washington Post, CBS's scoverage was "gripping, colorful, eventful," with "bright, data-packed and lit like a forest full of Christmas trees." Both papers thanked the network for staying with the elections through the night, something that all networks "once considered proper civic behavior."